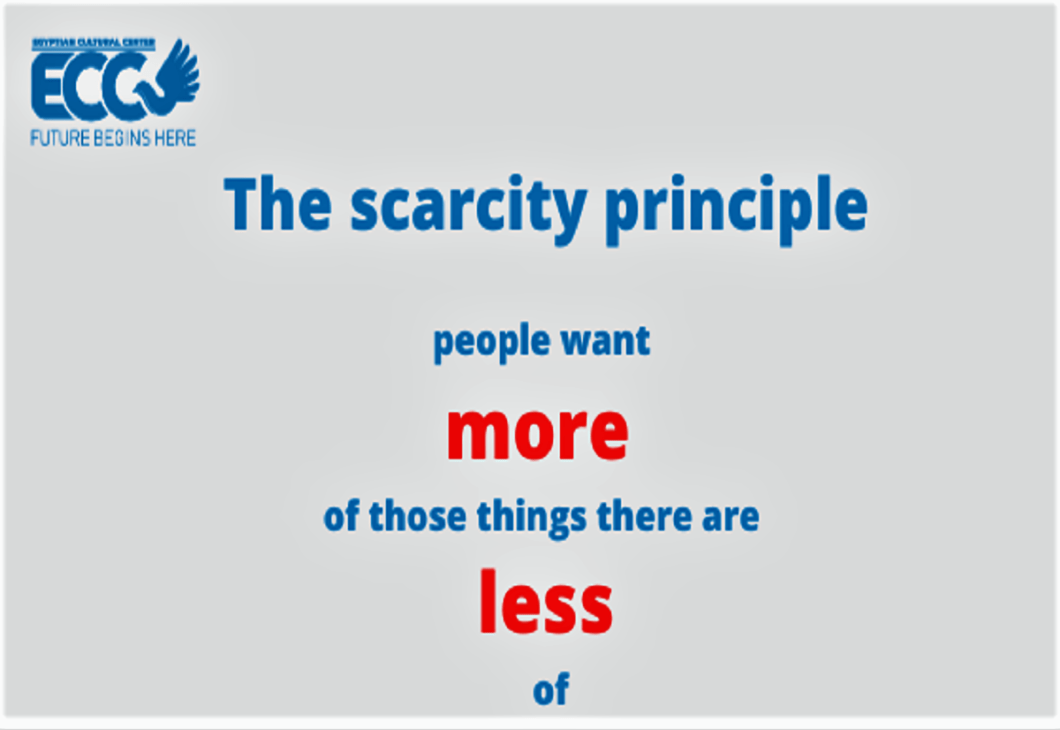 When opportunities become scarce, we desire them more.

According to the scarcity principle, when something is hard to obtain, it makes us more inclined to buy it. We humans see opportunities as more valuable if their availability is limited, and this seems to be because we just plain hate missing out.

A 1982 study by one of Cialdini’s students showed that when shoppers were told of a limited-time sale on meat, they bought three times more than if there was no time limit. Interestingly, this effect was compounded when people were told that only a select few knew about the sale. The scarcity of both the offer and the information itself made shoppers buy six times more meat than customers unaware of either limit!

So when does scarcity become a powerful influence on our decision-making?

Two conditions need to be fulfilled:

First, we tend to want something more if its availability has decreased recently than if it has remained steady over time. This is why revolutions tend to happen when living conditions deteriorate sharply rather than when they are consistently low; the sudden drop increases people’s desire for something better, so they take to the streets.

Second, competition always sets our hearts racing. Whether in auctions, romances or real-estate deals, the thought of losing something to a rival often turns us from reluctant to overzealous. This is why, for example, real estate agents often mention to buyers that several other bidders are also interested in a given house, whether true or not.

Banning something makes it very desirable.

You know the old adage that people only want what they can’t have? Well, there is some truth to it.

known as the Romeo and Juliet effect, so named because parents who erect barriers to hinder the romantic relationships of their children often only manage to deepen the lovers’ attraction. One study of Colorado couples found that when the parents tried to interfere with their relationship, feelings of love and desire for marriage only intensified! And when the interference was lessened, romantic feelings tended to cool off too.

Just like the case with scarcity, the Romeo and Juliet effect also stems from the fact that humans really hate losing opportunities.

Another law of influence is the power of consistency

We want to stay true to our word.

study by psychologist Thomas Moriarty shows that asking someone is probably a better idea than you think.

His results showed that in general, when people on a beach witnessed a staged theft of a radio from a neighboring towel, only 20 percent reacted. But if the owner of the towel had first asked people to “please watch my things,” 95 percent of their neighbors became near-vigilantes, even chasing down the thief and forcefully grabbing back the radio.

Quite simply, we humans have a strong desire for consistency: we wish our actions to be consistent with what we’ve said. As the study showed, this drive is so strong that it even seems to trump concerns for our own personal safety.

But what dictates consistency? The answer is simple: commitment. Research shows that once we commit to something with words or actions, we wish to be consistent with that commitment.

And public commitment is the most powerful driver of all.

The widely known foot-in-the-door sales technique takes advantage of how even small commitments affect our self-image. The first goal of salespeople is to get prospects to make a small purchase that is not even intended to make a profit.

The harder we have to work to get something, the more we value it.

To make the inner choice, they’ll need to convince themselves that it’s worth it, and this means elevating their view of the group they’re joining

Compliance professionals like salespeople can use, for example, the lowball trick to try to generate inner change in us. A car dealer might make such an astoundingly cheap offer on a car that we immediately decide to buy it. The dealer knows full well that, during the test drive, we will then independently construct several other reasons to buy the car besides the price, like its good mileage or nice colour.