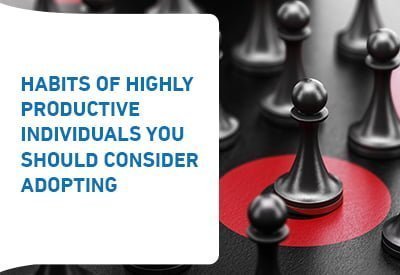 We all want to be always active & engage with the world around us without feeling tired or just wanting to lay back and call it a day. On the opposite spectrum, there are other people who always seem to appear active, energetic & are leaps & leagues beyond us.

These people are generally known as highly productive individuals and they are more than worthy of that title. Occasionally they are described as robots or tireless machines while the reality of the matter is there just like you and me.

The high productivity and the ability of those individuals to always perform at their peak productivity is not because their any different from us physically or have special gifts, but rather their adherence and commitment to a set of productivity habits. Today we will discuss the habits of those highly productive people.

It’s pretty easy to get lost in our own ambitions and how great it would be if that ambition was realized, however, it’s not reality and that’s exactly what highly productive individuals realize.

They ground these ambitions in reality in the form of action items or to-do lists by dividing the bigger task into smaller more manageable ones allowing them to judge how much they’ve accomplished what’s left and motivate themselves towards it and stay focused.

Another trait of those highly effective individuals is that they maximize their downtime making it seem that either the task is too simple or your thinking too small.

This division of labor allows them to be quicker, more accurate and focused on the task at hand than there counterparts it also allows them to manage their time in a more productive way.

They reflect and grow from their mistakes

As stated by the author Carol Dweck in her new york best selling book “Mindsets” which concentrates on fixed growth vs the oriented pathways of the brain, a successful person when faced with adversity, a challenge or failure focuses on the lesson learned and not the fact that it happened.

They Know perfection is a Myth and eliminate distractions

Succesful and highly productive understand that there’s not a right or a wrong moment to seize an opportunity and once they’ve set a goal the pursue its execution relentlessly, never confusing laziness with waiting for the right time.

They set their own measures of success

People tend to through around the word success as if success means the same thing for everyone, which doesn’t come near to the truth. Success or what constitutes as success is never the same across the board

To some, it might mean a happy and stable home life, to others, it might mean success in their career or be healthy. Highly successful people set their own success goals

They outwork everyone and envy none

It’s normal throughout your life that you will be meeting and competing with people that might be smarter, faster or even stronger than you but you should always be the one that works the hardest

Most highly productive individuals follow the same philosophy among the other habits of highly effective people, they might not get to through the first punch but the stay standing in the end and deliver a knockout.

The other side of the coin is  that they don’t envy others and they don’t give much thought or a  large amount of time to whom is better than them or more accomplished, they just want to achieve their own success

2) How can i be a Highly Productive individual?

Now that you know all about the traits of those highly productive individuals, the natural question that comes to mind is how can you be one of those walking powerhouses, Well here are some tips on how to become one of those individuals.

Start with your most important tasks (MITs)

We don’t mean you need to go to the Massachusetts Institute of Technology to be a highly productive person, but rather that when you filter out your to do list of tasks always start with the more important ones and then proceed to the less important.

Focus on prioritizing your “deep work”

The tasks you might encounter daily will mostly be limited to two types of tasks either one you can literally snooze through since there not interesting and others that require your full focus & attention which is generally referred to as deep work.

We highly recommend that you schedule your deep work at a fixed schedule on a daily basis, get ready to be bored you don’t need to love it but you need to accept that it will happen, lessen the number of contacts and interactions you have by asking them to prepare questions beforehand, and go through it in the set up your comfortable with.

Use the Eisenhower matrix to identify priorities

One threat of not figuring out your long term commitments from your short term commitments is that you can end up spending valuable time and energy on something that is not currently needed or of a high priority.

That’s why an Eisenhower matrix is ideal for this, it’s a 2 by 2 square with one axis having important and non-important on it and the other having urgent and non-urgent on it.  Plotting your different tasks according to the options on the axis will help you identify what’s the nature of each task

Our human brain is not designed or can withstand more than 8 hours of intense, constant and focused thinking & no amount of efficient habits can ever change that so accept that you’re gonna need to take a break from time to time.

Short breaks of a couple of minutes could be more than enough to reset your batteries but we recommend an alternation between 25 minutes of work followed by a 5-minute break.

Another practice is to consider is following the Pareto theory, a theory created by an Italian economist which states that 80 per cent of your results will come from 20% of your efforts.

Applying this on the behavior of highly productive people, they usually identify the most important 20% of their work and dismantle the remaining 80 into smaller tasks

Those were just some of the practices followed by productive and highly efficient individuals. With some adjustments to the way you carry your work tasks and utilize your time, you will join the ranks of these effective individuals.

All you Need to Know About your Next MBA

5 things you shouldn’t tell your Boss

5 reasons why remote work is good for you